This is an article about Titus my patient. Note website to see him at Westminster.


I am a Marshfield resident and I just returned from exhibiting our 22 month old dog, Titus, at the Westminster Dog Show at Madison Square Garden.

Titus is a "canine good citizen" and a multi-best of breed champion. Titus lives with school age children and two champion show dogs. He comes from a long line of dogs competing at Westminster, including his sire, half brothers, aunts, uncles, etc. Last year his aunt won Best of Opposite sex at Westminster.

Titus enjoys taking long walks at Brant Rock; Rexhame Beach; Humarock and hiking at Nelson Forest and Two Mile Farm. He frequents Marshfield Youth Soccer games. He has quite a fan club, with many spectators who have known him since he was 8 weeks old (when he first started attending games). He is also an obedience Champion with a "Rally Novice" title.

I've attached a picture of Titus winning Best of Breed at the Northwestern CT Dog Show (Sept 2009). From Left to Right: Judge Grace McGlynn (Ms. McGlynn was the rottweiler judge at Westminster this year); "Titus" Multi Best of Breed CH Cammcastle's Quiet Storm of Eis Haus RN CGC; Valerie McGraw (Titus' professional handler and a rottweiler breeder "EIs Haus Rottweilers"). I have purchased the right to publish this picture - so feel free to use it in print or online.

Titus' achievements include:
*Many Best of Breed wins, including "Best of Breed" at 8 months old
* Five Puppy Group Placements and Six Best of Breed- Puppy (including the dog show in Boston)
*Best in Puppy Sweepstakes at the CT River Working Group Association

Titus is a promising young dog. He is currently competing against the top ranked dogs in the United States. Our plans include limited showing until he matures. Until then, we will continue with obedience and having fun with tennis balls and making snow angels!

Below is the link to Titus competing at Westminster: http://video.westminsterkennelclub.org/player/?id=1202087
He appears around the 5 minute mark- being shown by a blond woman with a purple suit (Valerie McGraw).
Posted by Dr. Bruce at 3:47 PM 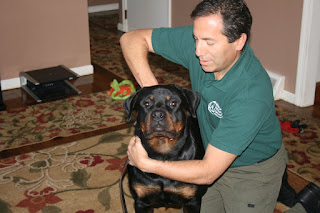 Recently a Roty that I have been adjusting named Titus from Marshfield Mass. showed at the Westminster Show in NYC and did awesome!! He is young still, only 21 months but has a very promising future. The owner remarked how flexible he was and had great confirmation which she attributes to his chiropractic care.
Posted by Dr. Bruce at 2:01 PM

Thanks for visiting the Latest in Chiropractic. My hope is to provide cutting edge information and resources to help you make better decisions around your health naturally. Whether you are new to chiropractic care or a season veteran, this blog is for you.

Dr. Bruce
South Weymouth, MA, United States
Started my practice in 1984, with a focus on families and athletes. I am also certified in sports injuries, and certified in animal chiropractic. Since 1984 I have been the Chiropractic Coordinator for the Boston Marathon and Team doctor for the US Triathlon Team. Currently I offer my Animal Chiropractic Services throughout New England, Horses and Dogs primarily. I only make house calls for dogs and barn calls for horses. I also teach at Options for Animals Chiropractic College.